Not unlike your own schoolyard, students in Latin America love to tell scary stories—and they’ve been telling them for centuries. While the characters in Latin American and Spanish folklore might seem strange, they attempt to explain the unknown in the same way that every legend does. Are they social cautionary tales, or just scary stories? How do their morals compare to some of the stories you’ve heard?

Keep those things in mind as you read these Spanish legends and myths from south of the border, and consider their cultural significance. When you finish reading, get your creative juices flowing and try out some new Spanish vocab by creating your own legend. Just click to download the pdf, the educational value could be monstrous. 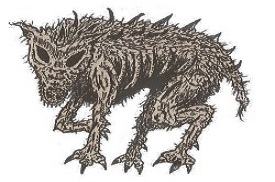 The blood-sucking dog from Mexico

Is it an alien species, or a mutant dog? First reported in 1995, farmers have blamed the disappearance and mutilation of their cattle on this hostile mythical creature. The Spanish legend has since taken root in Central and South America, extending as far as the Caribbean Islands. The whistling ghost from Venezuela

The legend goes that El Silbón is the ghost of a young boy who murdered his father and brings the omen of death. If you hear the faint whistle of “do-re-mi” while walking at night, that means he’s getting closer… The helpful gnome from Belize

Stories of these childlike goblins are common throughout Latin America. It’s believed they help lost travelers find their way out of the woods, though we don’t recommend stopping to ask for directions if you see one. The bedtime boogeyman from Spain

While this particular boogeyman (there are hundreds of them throughout the world) has roots in Spanish folklore, it has become a unique legend in Latin America. In Bolivia, Colombia, and Guatemala, he’s depicted as a large-headed monster waiting under the beds of disobedient children. The serpentine rooster from Chile

This bizarre-looking monster hatches from an egg incubated by a rooster, and lives in a hole underneath its victims’ house. It comes out only to feed on the saliva of those living above, slowly dehydrating the residents until they die.